We visited the first child care center at the beginning of my second trimester. For comparison, I don’t think we visited pediatricians until I was nearly 8 months pregnant. (I’ve never heard anyone having a problem finding a pediatrician, but child care was another story.) As a developmental psychologist whose job centers around early childhood education policy, practice, and quality, and having a mother in the business, I knew that high quality infant care would be hard to find (I’ll save the affordability part for later!). So we started early. 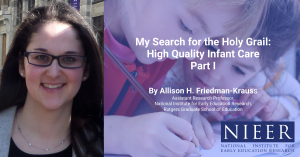 We ended up visiting four child care centers, all within a few miles from our home. There were others nearby but in the opposite direction from work, so I didn’t consider them. I contacted other places that never responded – that was not a good sign so I eliminated those quickly.  I thought about places near or on the way to work. But that search was harder – too many options and hard to figure out what would be most convenient. I searched the state child care database but I found it overwhelming. So I stuck with what was close to home. (The downside to this is that I now race out of the door at 5 PM and stress about getting stuck in traffic. As someone who rarely left the office before 6 PM pre-baby, this has been an adjustment.)

But we were lucky. First, I had options for infant care near home, and near work if I had searched harder. Second, I had options that I could feel comfortable with. My son (we didn’t know if it was a boy or girl when we visited) would have been fine at any of them. But even better, I really liked two of them. Third, both of the centers I was interested in, had availability – no waitlist. I didn’t have to stress about whether he would have a space when I had to go back to work. I had been warned the infant care was scarce.

We chose a center close to home, with a 1 to 3 teacher to child ratio (better than required by child care licensing which requires 1 to 4) and we liked the director. We went back and forth for a while between two centers –Which was more affordable (neither!)? Each charged differently for before and after care and the summer, so it wasn’t a straightforward question. Which had a better schedule? They both had more days closed than we would have liked – we are still learning how to navigate that especially since closures seem to coincide with the busiest work times for me and my husband (thank you grandparents!). Don’t get me wrong, I fully support teachers and staff getting much needed time off – it’s good for them and the kids. But as a working parent, it’s hard to plan around.

We also took a risk as the center was just starting an infant program. They refer to our son as their “first infant”. And for a while he was their only infant. While part of the reason for choosing a child care center was socialization, at 3 months old, I was thrilled that most of the time he had the undivided attention of his teacher. But I was anxious about it too – did they know what they were doing? He still was around older infants/toddlers who took an interest in him, often bringing over toys. He bonded with his teachers (I cried when they moved him up to the toddler class) and I knew he was in good, loving hands. And eventually, more infants signed up and he now has lots of friends!

While we’ve had mostly good experiences with the school we chose, it’s not perfect. And it’s expensive! We are lucky that we can afford “high quality care” for our son but it’s a lot of money out of our pockets each month. Not going back to work was never in the cards for me. I would love more time with our son. But I’m also a workaholic and invested a lot of time in my own education. While my Ph.D. in developmental psychology can help with parenting (right?), I needed to find child care to go back to work.

There are days when I second guess our decision but it’s usually due to frustration with communications and not with the daily interactions and experiences our son has at school. I take it as a good sign that he doesn’t want to leave school, even when he’s been there for 9 hours a day.

But not everyone is as lucky we were to find “high-quality” infant child care close to home, that they can afford, even if it’s more than they would like to spend.  Report after report finds that child care, especially infant and toddler child care, is hard to find and unaffordable for most parents. According to the Center for American Progress, more than half of American’s live in a child care desert, and this is likely higher when considering child care for infant and toddlers since centers tend to have fewer slots for babies, if any at all. A recent report from Child Care Aware finds that on average, married couples spend 11% of their annual income on infant care but single parents pay 36%! And here in New Jersey, a single parent pays nearly half(!!!) of their annual income on center-based infant child care. And that’s just for one child. That leads to the question: What can be done to improve access to affordable, high-quality, convenient child care for infants and toddlers?  This is not an easy question to answer, but stay tuned for Part II, appearing next week, where I consider what the answers might be.