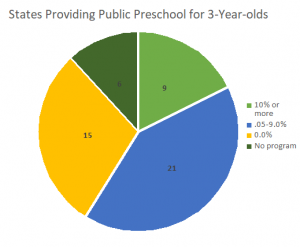 Infants and toddlers, preschoolers, and early elementary-aged children encompass the field of early childhood education, giving the impression that all children from birth through age 8, fit neatly into one of three categories. But state policies suggest something quite different for 3-year-old children as they often are neglected when state preschool programs are designed and funded. 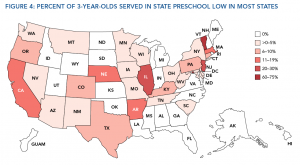 The map illustrates how 3-year-old enrollment in state pre-K varies around the country. Washington D.C. and Vermont served over 60% of both 3- and 4-year-olds in state-funded preschool programs, though both still serve significantly more 4’s than 3’s. However, this is a far higher percentage than any other state, with Illinois coming in next at 22%. By contrast other states that serve more than 50% of their 4-year-olds (Florida, Georgia, Iowa, New York, Oklahoma, Wisconsin, and West Virginia) serve 5% or less of their 3-year-old population.

Cross study comparisons suggest that the immediate and longer-term benefits of a high-quality preschool program are greater for children who have access to two years of preschool than for those who have just one. State policy clearly is not aligned with the research, and the risk of this departure from the models that supposedly are behind the push for preschool education is that the promised benefits will not materialize. Until state policies and investments start to follow what we know from research, too many 3-year-olds will continue to miss out on a critical year of exposure to high quality preschool.