This week NIEER released its 15th State of Preschool report, providing information on enrollment, spending, and policies related to quality during the 2016-2017 school year for 61 state-funded preschool programs across 43 states, the District of Columbia, and Guam.

The report is a rich source of information on state-funded preschool. This year’s report also features trend data from 2002, when NIEER began tracking state-funded pre-K, through 2017, and a special report on state preschool policies supporting young Dual Language Learners.

To help you get started digesting it, we’ve highlighted three key takeaways from this 2017 report:

Nationally, state spending per child fell since 2015-2016, adjusted for inflation, the first decrease in several years.
State investment in preschool per child enrolled fell in 28 states—nearly two-thirds of those with state-funded preschool. Research suggests that high-quality preschool can have positive, long-lasting impacts on children. But without adequate funding, it is unreasonable to expect that preschool programs can provide the high-quality experiences for children that lead to desired child outcomes.

Surprising trends from 2002 to 2017
Many states have made progress increasing preschool enrollment, funding, and quality. But others regressed or stalled, resulting in increasing inequality across states. 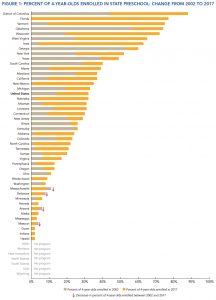 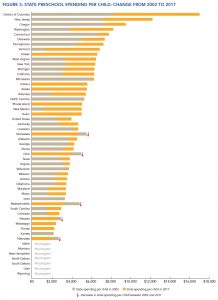 For additional information, please see The State of Preschool 2017

Dr. Friedman-Krauss, co-author of The State of Preschool reports, focuses on unpacking impacts of early education interventions, early education quality, and the cognitive and social-emotional development of low-income children. Combining these areas of interest, she has worked on a variety of research projects exploring the bidirectional influences between child behavior problems, classroom quality, and teacher stress in preschool classrooms; the effects of educational instability in children’s cognitive and self-regulation skills; and the relation between poverty-related risk and school readiness. She has also focused on improving measurement of early education quality and its relation to children’s learning in the context of center-based programs.