NIEER is hosting a blog forum on play-based learning in early childhood education, including posts from national experts in the field. Learn more about the forum here. Some worry that the push for quality education even partially driven by a desire to improve achievement may deprive children of important childhood experiences. Others worry that unstructured play without teacher engagement does little to develop children’s minds, particularly for children at high risk of academic failure.

The Capulets and Montagues of early childhood have long battled over their vision for a perfect preschool education.  Should young children be immersed in a core curriculum replete with numbers and letters or in a playful context that stimulates creative discovery?  The ‘preschool war’ leaves educators torn and embattled politicians in deadlock.  Playful learning offers one way to reframe the debate by nesting a rich core curriculum within a playful pedagogy.

The case for a strong core curriculum in preschool is compelling.  Toddlers’ oral language skills predict later language ability at school entry as well as their budding literacy skills.[i]  Learning to count, to think spatially, and to master concepts in preschool relates to later mathematical understanding and STEM (Science, technology, engineering and mathematics) development.[ii]  And early social competencies in emotion regulation predict later academic achievement.[iii]  Duncan et al. (2007) conducted meta-analyses across thousands of children and concluded that mathematics, emergent literacy scores, and attentional skills were the best predictors of later academic success. These results held for all children regardless of gender or socio-economic status.[iv] These findings are why Yoshikawa et al., (2013) reported that “interactions explicitly aimed at supporting learning, that foster both higher-order thinking skills in general and learning of content in such specific areas as early math and language” (p. 6) are a key part of what counts as high quality in preschool.[v]

The case for an academic curriculum is also bolstered by recent research challenging the value of play as a conduit for learning. Though Ed Zigler quipped that “play is under siege” in 2004, it came under a full frontal attack in 2012 when Lillard et.[vi] al, reviewed the evidence linking play and learning, declaring the evidence supporting causal relations between play and learning weak at best.  This claim sounded a premature death knoll for the Capulets who support free play as the core of a preschool education and adds fuel to the trend of replacing preschooler’s play with more time on academic pursuits.[vii]

Though it is clear that children benefit from a rich curricular approach to preschool education, that does not imply that kindergarten classrooms should become the new first grade. Mountains of evidence suggest that children learn better in active, child-centered, developmentally appropriate environments that adopt a playful pedagogy[viii] as in Montessori or Reggio[ix].  Marcon,[x] for example, compared three preschool models on a variety of academic, behavioral, and social measures. Children in child-initiated learning preschool environments were compared in sixth grade to children who experienced didactic, direct instruction or mixed methods (didactic instruction and play-learning). The children in the child-initiated classrooms showed superior social behaviors, fewer conduct disorders, enhanced academic performance and retention over didactic learners.[xi]

A number of well-conducted studies add ancillary evidence: Play has a central role as a medium for promoting school readiness in a whole, active child.[xii]  Links between play and learning are reported in the areas of language and literacy;[xiii] mathematics,[xiv] causality,[xv] and creativity.[xvi]

In her review of the Abecedarian program,[xvii] the High/Scope Perry Preschool Project,[xviii] and the Chicago Child-Parent Center Project,[xix] Galinsky noted that successful programs viewed children as active experiential learners using a pedagogical approach aligned with playful learning.[xx]  Even Lillard et al.[xxi] closed the now classic article suggesting that, “The hands-on, child-driven educational methods sometimes referred to as ‘playful learning’ (Hirsh-Pasek et al., 2009) are the most positive means yet known to help young children’s development”.  The evidence thus cries for some way to unite the warring factions in a more cohesive and inclusive approach to preschool education. Playful learning offers one such approach.

Playful learning is a whole-child approach to education that includes both free play and guided play.  While free play characterizes the pedagogy held by the Capulets, guided play offers a new twist. It refers to play in a structured environment around a general curricular goal that is designed to stimulate children’s natural curiosity, exploration, and play with learning-oriented materials.[xxii]  In guided play, learning remains child-directed. This is a key point.  Children learn targeted information through exploration of a well-designed and structured environment (e.g. Montessori[xxiii]) and through the support of adults who ask open-ended questions to gently guide the child’s exploration.  Two recent studies from our laboratory illuminate the power of a playful learning approach over a more directed approach to learning.

Fisher et al.[xxiv] compares direct instruction, free play, and guided play in a task in which 4- and 5-year old children’s learn the properties of geometric shapes. Children either explored triangles and hexagons on their own (free play), took the lead in exploring the shapes while an adult chimed in with supporting questions (guided play), or heard about the criterial properties of the shapes from the experimenter (direct instruction, “A triangle has three sides and three angles”).  Children learned to identify typical shapes in both the direct instruction and guided play condition. However, only the children in the guided play condition identified atypical shapes as instances of the category. Guided play allows children to become engaged; didactic instruction helps them memorize but not transfer what they have learned. Guided play helps constrain what children should be focusing on; free play leaves the field too open and does not help children focus on the target outcomes.  Alfieri et al.[xxv] supports these claims in a meta-analysis of children’s learning under different pedagogies. Discovery learning – analogous to free play – is not as effective as enhanced discovery learning where children are scaffolded. 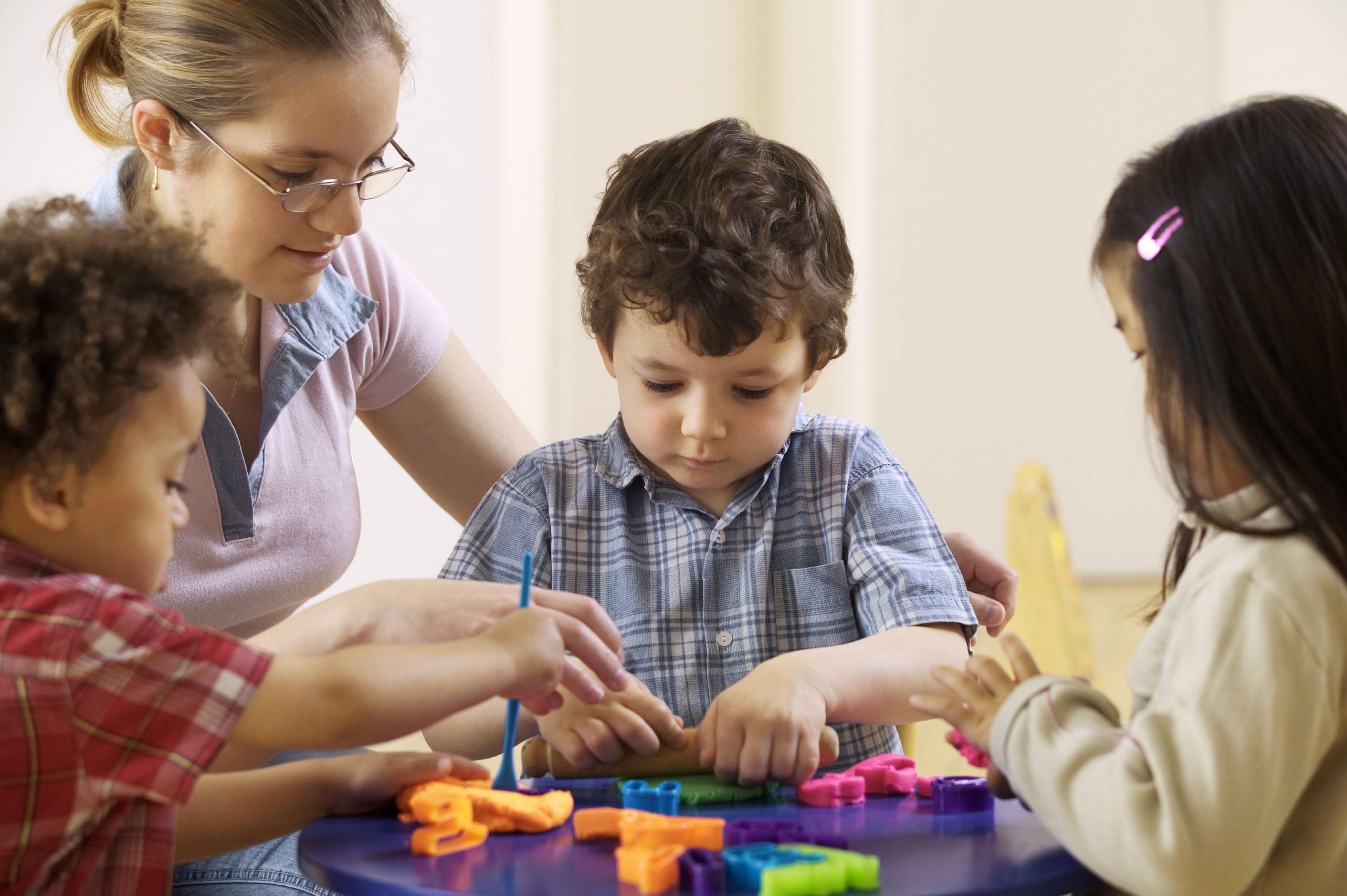 Similar results are emerging in an ongoing random control study of vocabulary learning in Head Start schools in Tennessee and Pennsylvania.  After hearing a book with targeted vocabulary, children either play with figurines designed to enhance learning (free play), rehearse the vocabulary through fun and engaging flashcards (direct instruction) or participate in a play session with the figurines in which adults support the child-initiated play with open-ended questions.  Preliminary results suggest that children do better in the guided play condition than in either the free play or the directed instruction conditions.[xxvi]

Finally, outcomes from the classic HighScope project[xxvii] show the merits of a playful learning perspective where curricular goals are achieved through a playful learning pedagogical approach.  By age 23, children who went to play-based, but curricular-rich preschools were eight times less likely to need treatment for emotional disturbances and three times less likely to be arrested for committing a felony than those who went to preschools where direct instruction prevailed.

Tests of playful learning are admittedly in their infancy (or maybe their toddlerhood), and as Lillard et al., (2013) rightly argue, much more research needs to be done to secure the relationship between aspects of play and domains of learning.[xxviii] Yet, the findings from our work and others suggest a rapprochement between the Capulets and the Montagues in the preschool debates. It is possible to have a curriculum rich in learning goals that is delivered in a playful pedagogy.  Perhaps Kagan and Lowenstein[xxix] put it best when they ask whether “school readiness and children’s play” are a “contemporary oxymoron or a compatible option?” Answering their own question, they write,

The literature is clear: Diverse strategies that combine play and more structured efforts are effective accelerators of children’s readiness for school and long-term development. Having made this assertion, let it be clear that play rather than being eliminated, must be elevated to a central position in this inquiry.

Ten years later, this remains the soundest read of the literature.

[i]  NICHD Early Child Care Research Network. (2005). Pathways to reading: The role of oral language in the transition to reading. Developmental Psychology, 41, 428-442.

[vii]  Bassock, D., & Rorem, A. (2013). Is kindergarten the new first grade? The changing nature of kindergarten in the age of accountability. Paper presented at the biennial meeting of the Society for Research in Child Development, Seattle, WA, April 2013.

Nicolopoulou, A., & Ilgaz, H. (2013). What do we know about pretend play and narrative development? A response to Lillard, Lerner, Hopkins, Dore, Smith and Palmquist on “The impact of pretend play on children’s development: A review of the evidence. American Journal of Play, 6, 55-82.