Well-trained, responsive, and effective teachers are essential to a high-quality early education program. While research has sometimes been murky on what the appropriate training and credentialing for early educators should be, a lack of good data has made it difficult in the past to explore the current situation. Recent research has helped shed some light on what the characteristics of early childhood educators.

The 2012 State Preschool Yearbook indicates that progress has been made in increasing the qualifications of teaching staff. In the 2011-2012 school year, 58 percent of state pre-K programs required lead teachers to have a bachelor’s degree, increasing from 45 percent in 2001-2002. Eighty-five percent of programs now require lead teachers to have specialized training in early childhood, up from 74 percent a decade ago. For the first time in the 2012 Yearbook, NIEER asked for the breakdown of pre-K teachers by degree, which helps paint a picture of credentialing on the ground. While 22 programs were not able to report these figures, having some of this information is a step in the right direction. According to Center for Law and Social Policy (CLASP), the percent of Head Start teachers with a BA or higher increased from 45 percent in 2010 to 57 percent in 2011, indicating significant progress on teacher credentials in recent years. While the CLASP report goes into more detail, preliminary figures for the 2012 year can be gathered from the FY14 Congressional Justification for the Department of Health and Human Services (Head Start section beginning on page 95).  These figures are summarized in Figure 1. 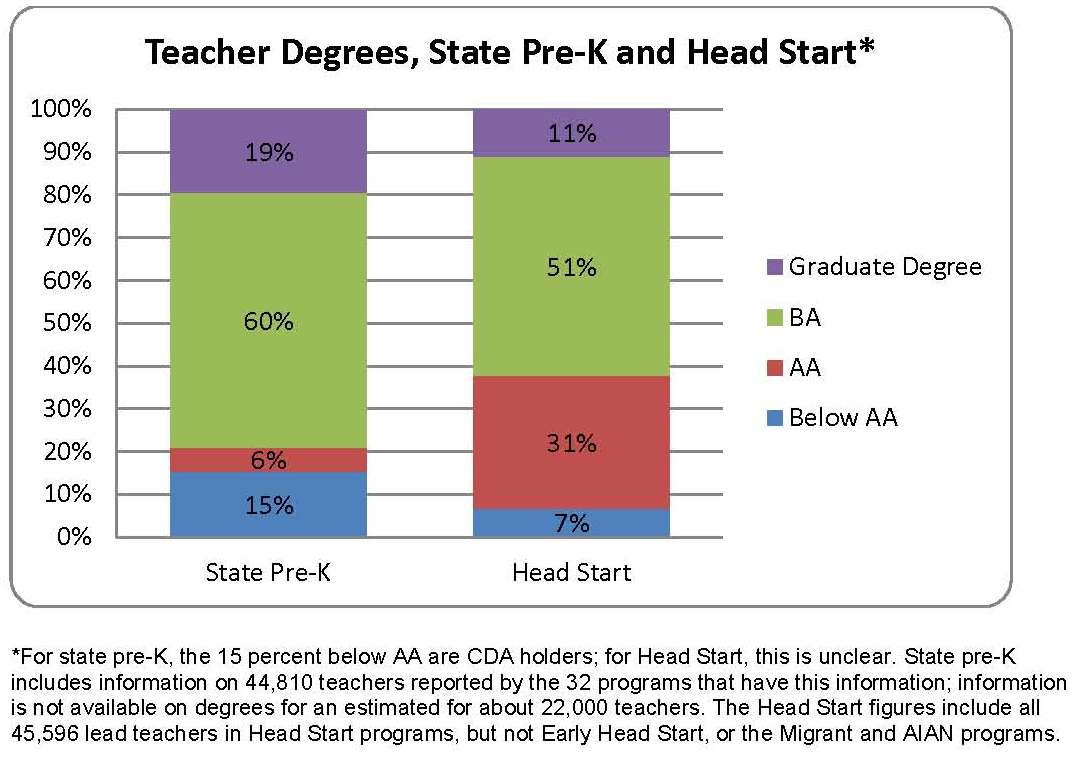 Any discussion of teacher credentials must also discuss compensation: without adequate compensation, early education programs will likely see high turnover and difficulty in recruiting the best teachers who could be paid higher in K-12 classrooms. It is also difficult to require teachers to meet higher degree requirements without increasing salary. According to 2009 data from the Bureau of Labor Statistics, the average annual salary across settings for a Preschool teacher (not including special education) was just $27,450, compared to $50,380 for a Kindergarten teacher and $53,150 for Elementary School teachers generally. Information specific to both state-funded pre-K and Head Start programs bear out this trend of comparably low pay. Data from the 2009 Yearbook (the last year for which salary information was collected) indicates that for state-funded programs which could report data on salaries, 83 percent of pre-K teachers in public school settings and 88 percent in nonpublic school settings were paid below $50,000l, as seen in Table 1 below. For those reporting, the median salary category was $40-44,999 for those in public schools and $30-34,999 for those in nonpublic school settings. 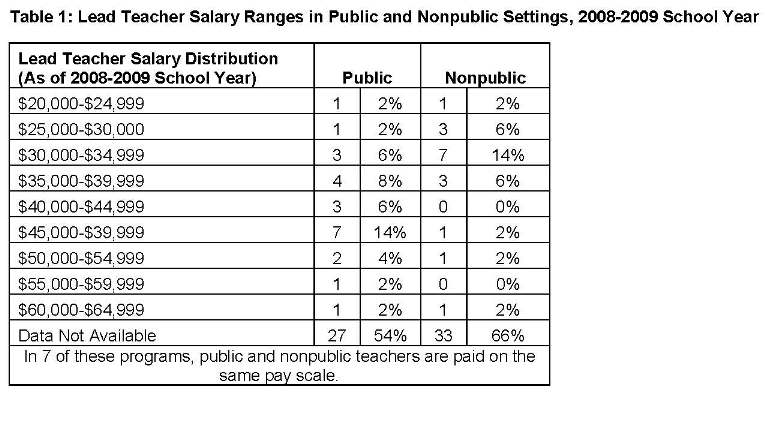 What does this all mean for the field? A new paper from Stanford University’s Center for Education Policy Analysis (CEPA) found that the turnover rate from 2009 to 2010 among school-based early childhood care and education workers was 13.6, while center- and home-based workers had turnover rates of 24.4 percent and 28.5 percent, respectively. These data may include providers and teachers not included in state-funded pre-K or Head Start data, but coupled with reports from Georgia’s highly regarded state pre-K program that teachers left in droves when salaries were cut due to a shortened school year, it is clear that teacher turnover is an issue of continued concern in early education.  The CEPA paper goes on to examine trends in the field across sectors from 1990 to 2010 and found that despite significant attention and investment in the field during this time period, the “workforce remains a low‐education, low‐compensation, and high‐turnover workforce.” As researchers and policymakers alike consider complex issues like teacher effectiveness and evaluation, aligning across sectors, and best reaching traditionally undeserved students, it bears reminding them that a well-educated, well-respected, professional workforce is essential to getting the most bang for the public’s buck in early education.