In January’s State of the Union address, President Obama highlighted several initiatives meant to simplify child care for America families. The White House’s budget proposal for Fiscal Year 2016, released on Monday, provides further insight into the costs and details of these programs as well as additional areas of focus within the early childhood world. 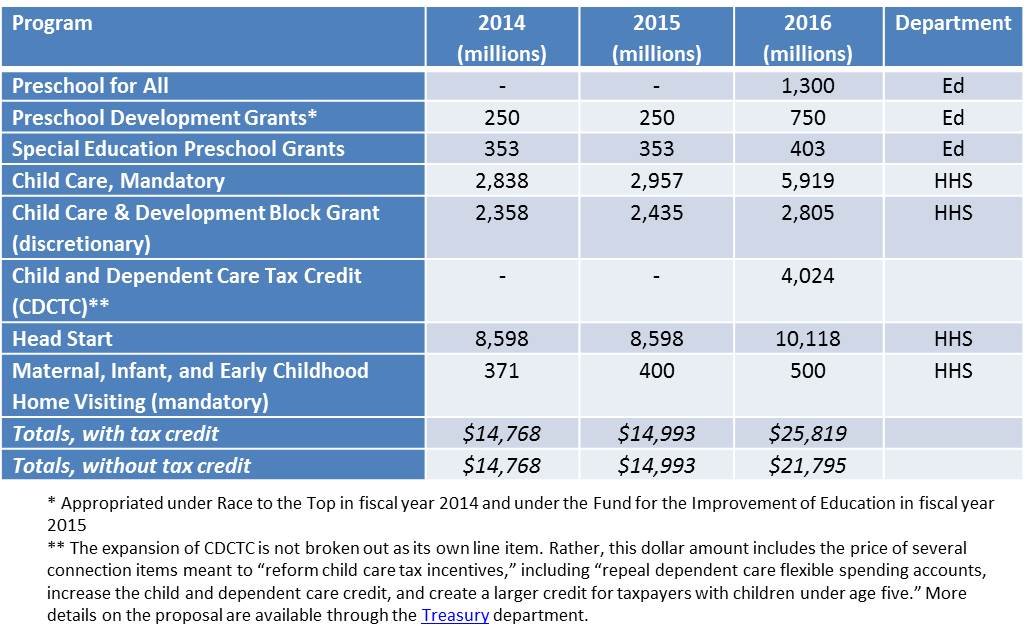 Early childhood education is often referred to as a “patchwork” system in reference to the number of public and private stakeholders–with varying program requirements and goals–who are involved, and the federal budget is no exception. Several departments have larger programs that operate projects in early childhood education. The Department of Education oversees Special Education Preschool Grants and houses the current Preschool Development Grants program, as well as the President’s proposed Preschool for All program. The Department of Health and Human Services (HHS) also collaborates on the Preschool Development Grants program. HHS oversees Head Start, child care, and the Maternal, Infant, and Early Childhood Home Visiting (MIECHV). The President has also proposed expanding the current tax benefits for families paying for child care–a complex change to tax policy which would not be covered by either department as it is not itself a program.

Much of what the White House is proposing in this budget has been seen before. The Preschool for All program is similar to the version proposed in the FY 2014 budget, and the Preschool Development Grants seek to distribute funds to more states than those already awarded grants in FY 2015. A review of budget documents from the Education and HHS departments does reveal some suggested changes:

The Obama administration has touted this budget as crucial to progress for the middle class. These proposals focused on the early years on life would fill major gaps in service for many of America’s children–children in low-income families who do not have quality care while their parents work; children whose families feel the “middle class squeeze” and could greatly benefit from the increased CDCTC; children with special needs for whom quality early intervention services can make a world of difference. However, two essential questions should be asked about each element of the proposal. First, is it designed in such a way that it will significantly improve the quality of children’s early educational experiences? Much of the potential benefit to children and society depends on the answer. Second, what is the potential for passage?  Without support across the aisle, as well as at the state level, these proposals will remain just proposals. Recent experience suggests that, at least for education, proposals designed to help every child will be better received than those that exclude the families expected to pay for them.