This week, the Center for the Study of Child Care Employment released its report Worthy Work, STILL Unlivable Wages: The Childhood Workforce 25 Years after the National Child Care Staffing Study with a live event at the New America Foundation. In 1989, the National Child Care Staffing Study brought attention to the high turnover rates and poverty-level salaries for early childhood education teachers. The new report revisits the topic of teacher wages and working conditions in light of the dramatic increase in attention to, and investment in, early childhood education in the last 25 years. Despite this focus at the local, state, and federal government levels, as well as in private industry and philanthropy, early childhood education teachers are still struggling to get by.

Some striking findings of the report:

NIEER has written previously about the need to pair increased requirements for early childhood teachers with a fair and equitable pay scale, as well as the importance of professionalizing the field. The authors of CSCCE’s report also highlighted a potential role for NIEER through a renewed call for a focus on data: “States, through their Quality Rating and Improvement Systems (QRIS), and entities such as the National Institute for Early Education Research that provide guidelines for improving state ECE policy, strengthen these existing vehicles for encouraging quality programs by including workplace and compensation policies among their quality criteria.”

NIEER has previously collected data on state policies for pre-K teacher salary in the State of Preschool Yearbook, though the 2008-2009 school year was the last year for which NIEER requested this information. This was the discussed in a recent paper:

The 2008-2009 survey collected information from states about teacher pay. As shown in Table 1, in programs able to report salary range for pre-K teachers in public settings, 83 percent were paid less than $50,000; in nonpublic settings, 88 percent were below that level. The majority of programs were unable to report this information, which is why NIEER stopped collecting it. These data indicate that the median salary for teachers in public school settings was $40,000 to $44,999, while for those in private settings it was $30,000 to $34,999…. 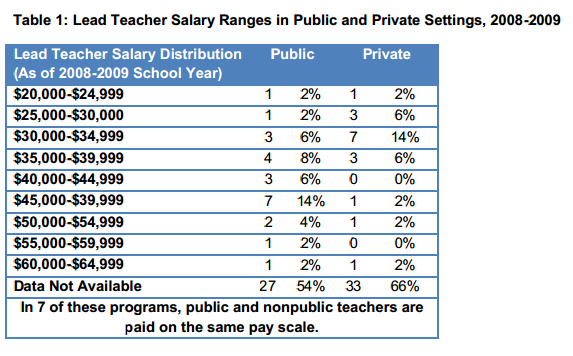 Through the 2009-2010 school year, the NIEER survey also asked whether teachers in state-funded pre-K programs were paid on the same scale as similarly qualified K-12 teachers. The survey results indicated that 31 percent of programs reported that teachers in the state-funded pre-K program were paid on the public school salary scale; another 39 percent reported that the public school pay scale applied to teachers in public schools but not in private settings. Given CSCCE’s finding that teachers of children ages 0 to 5 routinely earn less than kindergarten teachers, pay disparity is clearly an issue in both public and private settings.

How does the field move to rectify the low teacher salaries that are a real problem in early childhood education? The ongoing conversation around the report, as well as the authors’ recommendations, call for multiple approaches, ranging from improving data collection in workforce registries; to establishing regional guidelines on entry level wages and pay increases; and focusing on teacher pay in subsequent legislation, including the next Head Start reauthorization.