In a recent post, Fawn Johnson of the National Journal’s Education Insider asked

If everyone wants preschool, why isn’t it growing? What catalyst is needed to dramatically grow preschool enrollment? Why has it stalled? What can state and city governments do to increase enrollment?

There is ample evidence the public, across the country and across political orientations, strongly supports early childhood education; some states and cities are seeking ways to provide it:

Just before children started back to school this year, Gallup surveyed Americans on their attitudes towards the importance of education, including preschool education. Results continue to indicate strong backing for early childhood education programs, supported by federal funds, even when Americans believe that preschool (and college) are less important to long-term life outcomes than the K-12 years. Together, 73 percent of Americans polled indicated that they believe preschool is very important for future success in life.

Figure 1: How important would you say the education a person receives at preschool is to a person’s ability to succeed in life? 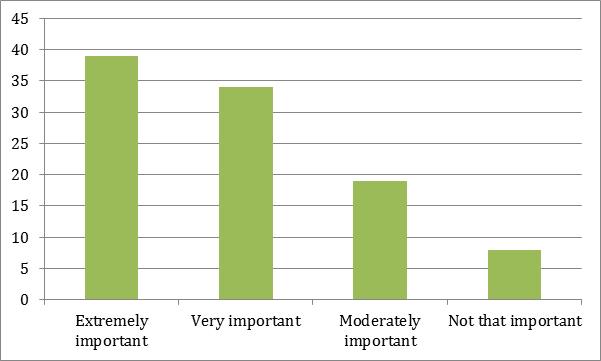 There are differences in perspective along political lines, (53 percent support from Republicans, 87 percent from Democrats); as well as by income (81 percent in low-income families compared to 65 percent in both middle- and high-income families); and by status as parents of young children (75 percent among families with children under 18, compared to 68 percent for those without), but overall, approval is strong, with 70 percent supporting the use of federal money to “make sure high quality preschool programs are available for every child.”

Since at least 2013, polls have been showing growing, strong, bipartisan enthusiasm for early childhood programs. Polling in July showed similar results. NIEER Director Steve Barnett wrote then about the importance of maintaining high quality standards when increasing access to programs—providing care is not enough, without quality, to lead to the short- and long-term outcomes the public now expects from preschool.

Among Georgia respondents, 52 percent indicated they would be more likely to vote for a legislator who had worked to expand access to preschool. Overall, support was stronger among Democrats responding, although almost half of Republicans polled said they supported expanding access to preschool.

Politicians at all levels are responding to this public interest. This year, New York City has offered 50,000+ new preschool spots (not without some challenges) and states and cities across the country are wondering whether New York’s quick implementation can serve as a model for their own plans to scale up preschool programs. Across the country, states and cities are stepping up to find their own ways to increase access, along with quality. Politico recently reported on the role of pre-K in several high-profile races, including those in Maryland, Michigan, Ohio, Pennsylvania, Rhode Island, and Texas. Several ballot initiatives as also focused on pre-K, including two separate initiatives in Seattle and San Francisco.

Preschool is on the rise in areas where it has historically not fared as well. Hawaiians are voting on a Constitutional amendment to allocate state funding to private preschools, an important question as the state seeks to expand public access to pre-K. The mayor of Indianapolis (in a state with no state-funded pre-K) has been working on an initiative introduced in July to provide scholarships for 4-year-olds to attend high quality preschools, and funds for programs to improve service quality. The scholarship program would be funded by reducing a tax credit to homeowners, at a cost of about $22 per home. Indiana has also introduced a 5-county pilot preschool program, and business and nonprofit leaders are strongly encouraging increased funding for that program to expands access.

At the federal level, there has also been movement toward expanding access to preschool programs. Two bills related to early childhood care and education have been addressed in Congress; the Child Care and Development Block Grant, which adds an increasing focus on quality in child care; and Strengthening Education Through Research, which will make data more accessible to schools, and research more relevant to policy decision-making. At least 30 states have also indicated their intent to apply for federal funding through Preschool Development Grants to introduce or expand state preschool programs; including Texas, which declined to participate in a previous round over Common Core concerns.

Along with improved access, voters also clearly want high-quality opportunities, as can be seen in a series of infographics from Grow America Stronger. 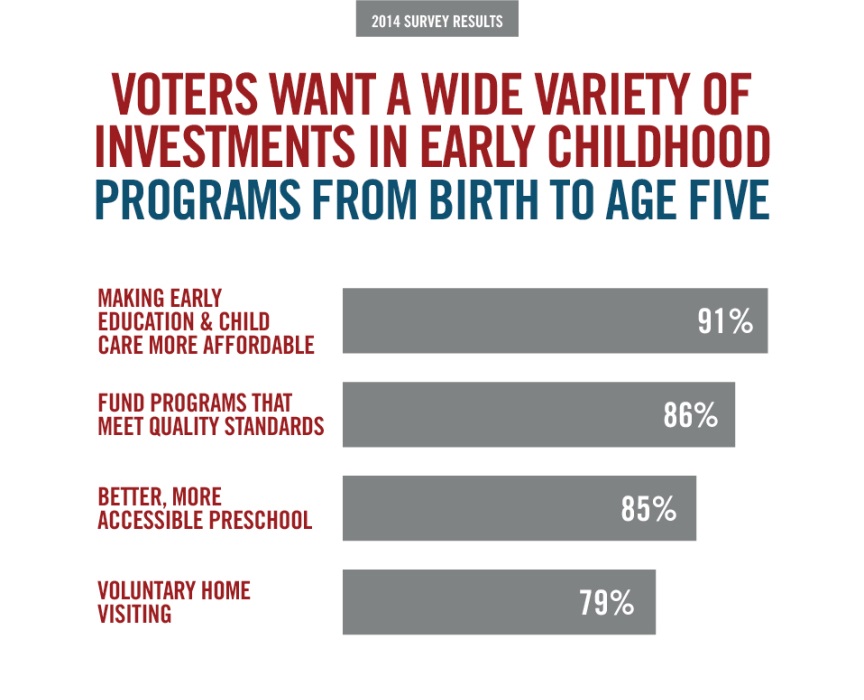 So the public is asking for high quality preschool. Some states and cities are looking for ways to make that happen. If yours isn’t one of them, maybe you should be asking why not.