Attendance of K-12 students has long been recognized as an important indicator of student engagement with implications for achievement, but until recently attendance has received less attention in pre-K. Indeed, parents and educators sometimes seem to view pre-K absence as of little consequence. Research indicates that needs to change.

Studies in Baltimore and Washington, D.C. showed pre-K chronic absentee rates ranging from 20-30 percent “and could suggest that absenteeism among our youngest students…is a potential epidemic that the country simply does not know about yet,” the study states.

Pre-kindergarten attendance matters: Early chronic absence patterns and relationships to learning outcomes focused on students in Chicago. Results indicate absence in pre-K was widespread, “particularly among African American students and those who entered pre-kindergarten with the lowest skills.”

“By third grade, students chronically absent for multiple years exhibited the need for significant intervention to read at grade level,” the report states. “These findings suggest that providing supports to improve attendance in pre-kindergarten and early elementary years has the potential to reduce achievement gaps and redirect struggling students onto the pathway toward educational success.”

Of course, the underlying causes of chronic absence may also contribute to later problems, but clearly improving attendance and family engagement are positive steps that could benefit from greater attention. 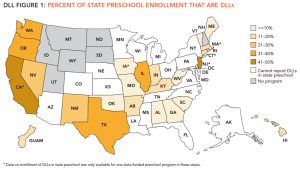 From our State of Preschool 2017 special report on state policies supporting
young Dual Language Learners.
The * indicates data on enrollment of DLLs in state preschool was only available
for one state-funded program in these states.
States in white could not report the languages of enrolled children; gray states had no state-funded pre-K in 2016-17.

Join @PreschoolToday (NIEER) and @MomsRising for an #EarlyEdChat on Twitter at 2 pm Eastern, Thursday May 3. We will discuss The State of Preschool 2017, trends in state-funded preschool enrollment, funding and quality standards since 2002, when NIEER began tracking state pre-K, as well as findings of our special report on state policies supporting young Dual Language Learners.

In a new JMIR Mhealth Uhealth article, researchers describe the initial development and pilot testing of the Interactive Child Distress Screener (ICDS). The ICDS is a Web-based screening instrument for the early identification of emotional and behavioral problems in children aged between 5 and 12 years and is based on child responses.

Authors suggest the ICDS has the potential to obtain clinical information from the child’s perspective that may otherwise be overlooked. They further suggest the project highlights the importance of involving an expert review and user co-design in the development of digital assessment tools for children.

Maternal Anxiety, Depression and Sleep Disorders Before and During Pregnancy, and Preschool ADHD Symptoms in the NINFEA Birth Cohort Study

In a recent Epidemiology and Psychiatric Sciences article, researchers examined the relationship between maternal anxiety, depression, and sleep disorders and preschooler ADHD symptoms. The study was based on NINFEA (Birth and Infancy: Effects of the Environment—in Italian Nascita e INFanzia: gli Effetti dell’Ambiente) project data.

Researchers found that total ADHD score at age four was related to maternal lifetime anxiety, sleep disorders, and depression. All the estimates were enhanced when the disorders were active during pregnancy and attenuated for disorders active only during the pre-pregnancy period. Researchers conclude that maternal anxiety, depression, and sleep disorders were associated with a relative increase in the number of ADHD-H, ADHD-I and total ADHD symptoms in preschoolers in this study.

Preschool and Children’s Outcomes in Elementary School: Have Patterns Changed Nationwide Between 1998 and 2010?

In a recent Child Development article, researchers examined whether the associations between preschool participation and children’s academic and behavioral outcomes—both at school entry and through third grade—have changed over time. Researchers based analyses on data on the kindergarten cohorts of the Early Childhood Longitudinal Study of 1998 and of 2010, both of which are nationally representative samples.

Findings are quite similar across the two, nationally representative, U.S. cohorts. Researchers report that preschool is positively associated with academic outcomes and negatively associated with behavioral outcomes both at school entry and as children progress through school. They also report that analyses revealed no evidence that associations between preschool and medium‐term child outcomes differ by elementary school characteristics.

Prenatal Co-exposure to Neurotoxic Metals and Neurodevelopment in Preschool Children: The Environment and Childhood (INMA) Project

In a new Science of The Total Environment article, researchers examined the effects of prenatal co-exposure to neurotoxic metals—Arsenic (As), Cadmium (Cd), Mercury (Hg), Manganese (Mn) and Lead (PB) related to neurodevelopment in preschool children. Analyses were based on the Spanish Environment and Childhood (INMA) Project data collected between 2000 and 2008.

Researchers found that prenatal exposure to As and Hg may be a risk factor for cognitive and motor impairment in children. Researchers also report that the effects of Cd and Mn on neurodevelopment was less clear. The study authors recommend that future studies should examine combined and interactive effects of exposure to multiple metals during vulnerable periods of brain development, prospectively.

Maternal Depressive Symptoms During and After Pregnancy and Child Developmental Milestones

In a new Depression and Anxiety article, researchers examined the timing, symptom severity and additive influences of maternal depressive symptoms during and after pregnancy on child neurodevelopment. Researchers found that maternal depressive symptoms during pregnancy, in the first year postpartum and in early childhood were associated with poorer child neurodevelopment.

Researchers suggest that antenatal and post-pregnancy depression have additive effects on neurodevelopment. Children of mothers with the most chronic and severe depressive symptoms during pregnancy had the most neurodevelopmental disadvantages.

American Progress has an immediate opening for a Campaign Manager to join the Early Childhood Policy team. The Campaign Manager will help advance a progressive agenda for early childhood at the federal, state and local levels, promoting action on child care, preschool, and other programs that affect children from birth to 5 years old. The ideal candidate will combine significant project management experience with strategic thinking, communications, and advocacy in order to promote the progressive early childhood agenda.

To apply, e-mail your Word resume and cover letter attachments to: jobs@americanprogress.org. Or you may write to: Center for American Progress, 1333 H St. NW, 10th Floor, Washington, D.C., 20005.

Dr. Marina Umaschi Bers, a professor at the Eliot-Pearson Department of Child Study and Human Development and the Computer Science Department at Tufts University, will present an overview of her interdisciplinary research program by using the metaphor of playgrounds vs. playpens to understand the role of technology in children’s lives.

The webinar will cover ideas from her recent book “Coding as a Playground” where she argues that coding should be seen not only as a technical skill but as a new literacy—a new way for children to express and share their ideas. Click here to register for this webinar.