From Darwin to Tasmania

Early learning and childcare workers in Australia this week stayed home – with many parents doing the same out of necessity and solidarity—to demonstrate their value and demand better wages.

Their union, United Voice, is seeking a 30 percent pay raise for the nation’s 108,000 childcare workers from the Federal Government. The one-day strike closed about 320 centers, affecting about 30,000 families, according to news reports.

“This has enormous support,” the union’s assistant national secretary Helen Gibbons said. “From Darwin to Tasmania.”

Childcare workers in Australia with the required certificate earn an hourly wage of about $21.29—above the national minimum wage of $18.29 per hour but only half the average full-time wage of $42.89, according to media reports. And research shows that gap is pushing experienced child care workers out of the classroom. (Dollars are Australian, not US)

Factors contributing to the low wages include traditional wage gaps for women who make up 90 percent of the childcare workforce in Australia, perceptions that working with young children is akin to babysitting or parenting (rather than educating) and a tendency for policymakers to worry more about the financial burdens on families relying on child care than on child care employees, according to researchers.

Similar issues influence the early childhood workforce in the US.

Preschool teachers participated in the recent strike in West Virginia that closed schools for almost two weeks before lawmakers agreed to a 5 percent pay raise. And preschool teachers also are poised to walk out next week along with their K-12 colleagues in Oklahoma—ranked 49th nationwide in teacher pay–unless their compensation is improved.

NIEER’s analysis showed public pre-K programs in 24 states–more than half of the 44 states funding pre-K–have no compensation parity policies for teachers.  Generally, pre-K teachers with a bachelor’s degree or higher can expect to earn $10,000–$13,000 less per year than colleagues teaching slightly older children, even if they work in the same building.

The upcoming State of Preschool 2017 report will detail state preschool teacher salaries per state for the 2016-17 school year. 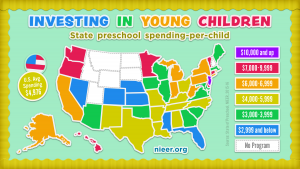 NIEER is rolling out a series of infographics highlighting  key elements of our State of Preschool report. Please share on social media and watch for the new report to be released on our website Wednesday April 18, during the NAEYC Week of the Young Child.

A variety of state-funded pre-K programs generally produce broad gains in participating children’s learning, as measured at kindergarten entry, according to NIEER’s study published this week in AERA Open.

However, these positive findings come with some important cautions that—in the context of the broader research literature—suggest two key lessons for policy makers.

In advance of its sixth annual Roundtable for state early childhood specialists, CEELO will be hosting a series of webinars  designed to share expert content that will be a focus of the conference. Webinars are free and open to anyone interested. Topics include:

The Roundtable is collaboratively planned by CEELO, NAECS-SDE and national technical assistance partners. Learn more about the 2018 Roundtable here.

MATERNAL DEPRESSION AND THE DEVELOPMENT OF EXECUTIVE FUNCTION AND BEHAVIOR PROBLEMS IN HEAD START: INDIRECT EFFECTS THROUGH PARENTING

In a new study published in The Infant Mental Health Journal, researchers examined the relationships between maternal depression of the mothers of 3-year-old children and executive function and behavior problems of these children when they were 4 years old.  The research was based on a large and nationally representative sample exceeding 3,000 Head Start children.

Analysis revealed that mother-reported warmth (but not mother-child reading) mediated the relationship between maternal depression, children’s executive function, and behavior problems. Researchers suggest that their findings provide a family process model for families whose children are exposed to maternal depression in which warm, sensitive parenting supports children’s emerging self-regulation and reduces the likelihood of early onset behavior problems.

THE BENEFITS OF EARLY CARE AND EDUCATION FOR CHILD WELFARE-INVOLVED CHILDREN: PERSPECTIVES FROM THE FIELD

Early care and education (ECE) is not widely utilized by children in the child welfare system (CWS). In a recent study published in the journal of Child Abuse and Neglect, researchers explored the perspectives of child welfare caseworkers, ECE providers, and parents/caregivers on the benefits of CWS-supervised children’s participation in ECE.

EFFICACY OF EARLY INTERVENTIONS FOR INFANTS AND YOUNG CHILDREN WITH, AND AT RISK FOR, AUTISM SPECTRUM DISORDERS

In an article published by the International Review of Psychiatry, researchers conducted a review of the Autism Spectrum Disorder (ASD) early intervention (EI) literature that focuses on efficacy studies published within the past 15 years. The context for, the timing of, and approaches to intervention are discussed, as well as predictors of treatment outcomes.

Researchers suggest that young children with ASD can benefit from EI and that parent-coaching interventions can be effective in supporting parents to implement child-responsive engagement strategies. Researchers recommend combining parent-mediated and direct clinician-implemented intervention to maximize child developmental gains. Finally, based in the review of the literature, clinical practice recommendations are presented.

MANDATORY NAPTIMES IN CHILDCARE DO NOT REDUCE CHILDREN’S CORTISOL LEVELS

Research has suggested that while intended to be restful, mandatory naptimes may induce stress in those children unable to sleep. In a new paper released in Scientific Reports, researchers compared mandated/flexible sleep practice by nap/no-nap conditions to examine group difference in stress responses of preschool aged children. Salivary cortisol level was tested at waking, pre-naptime, post-naptime, and bedtime across two days at child care.

The Department of Human Development and Family Science (HDFS) at Oklahoma State University invites applications for the position of Instructor/Assistant Professor of Professional Practice in Early Childhood Education (ECE). The ten (10) month, non-tenure track faculty position supports the HDFS department’s mission of reducing risk and promoting resilience within individuals and families across cultures and generations.

The federal Administration for Children and Families’ 2018 National Research Conference on Early Childhood will be June 25–27, 2018, at the Crystal Gateway Marriott in Arlington, VA.

This conference, presented by the Office of Planning, Research and Evaluation in conjunction with the Office of Head Start, is a leading venue for research on the development, education, and care of young children and their families, and the policy and practice implications of the findings.

Click here for event registration and information. There is no cost to attend the conference although participants should register in advance.