The spending bill moving through Congress this week finances programs through September, setting the  stage for fiscal 2019 and demonstrating a resounding commitment to funding early education programs—at least for now.

According to an analysis by New America, the House omnibus spending bill – required to dodge a looming government shutdown—boosts the Child Care and Development Block Grant (CCDBG) program by $2.37 billion—enough to increase access and raise quality. This is a historic increase after many years of neglect.

House members also voted (256-167) to cancel Office of Head Start plans postponing implementation of 2016 program quality standards. In January, OHS announced they would not require programs to offer a longer day and year for 4-year-olds “because the program would need to cut 41,000 slots to make the change under current funding levels.” This spending plan specifically provides funding so that Head Start can increase program hours.

As NIEER Weekly was publishing, the plan had won Senate approval and was awaiting action by the Trump administration, to avoid a shutdown on Saturday. We hope it is not overly optimistic to think that Congress is taking bipartisan action informed by evidence regarding the need to raise quality if early childhood education is to be a sound investment of public dollars. 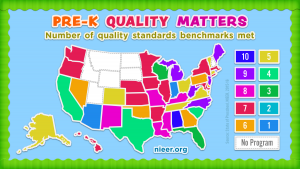 NIEER is rolling out a series of infographics highlighting  key elements of our State of Preschool report. Please share on social media and watch for the new report to be released in April during the NAEYC Week of the Young Child.

The CPQ&R is now easier to use and adapt to specific questions, with more ways to customize, compare alternatives and calculate both costs and funding options.

Hosted by CEELO, the Financing Quality Preschool webinar also featured a virtual tour of the redesigned CPQ&R webpage, featuring the CPQ&R Communications Toolkit and CPQ&R FAQ, and a demonstration of how to use the CPQ&R to answer questions related to projecting costs and revenue.

Over the past year, the Council of Chief State School Officers, a CEELO partner, has been working closely with several states to develop statewide family engagement frameworks.

As part of this State Consortium, each state is committed to developing a Birth-to Grade 12 family engagement framework designed to enable SEAs to guide and work with early childhood education providers and local districts in a coordinated and seamless outreach to families.

Two reports issued this week by the Migration Policy Institute’s National Center on Immigrant Integration Policy point to promising approaches to working effectively in multilingual, multicultural classrooms—an increasing reality with nearly one-third of the U.S. child population age 8 and under growing up with one or more parents speaking a language other than English at home.

The first report, The Language of the Classroom: Dual Language Learners in Head Start, Public Pre-K, and Private Preschool Programs, examines teachers’ use of language across different contexts to highlight effective practices and provides examples of exemplary teaching in diverse classrooms.

The second report, Supporting Dual Language Learner Success in Superdiverse PreK-3 Classrooms: The Sobrato Early Academic Language Model, focuses on the pre-K-to-Third Grade SEAL model used in California. Piloted in 2008 in bilingual/dual-language and English-instructed settings, the SEAL model is designed to provide young English learners with language-intensive support integrated throughout the curriculum, in and through academic content.

These reports conclude a three-part series on superdiversity. The first report draws from MPI analysis of U.S. Census Bureau data to provide a demographic profile of DLLs and identify some key challenges ECEC systems and K-12 schools face.

Researchers found that preschoolers’ sustained attention ability in the face of distractions was positively related with the preschoolers’ early numeracy skills and knowledge, but not significantly associated with child age or performance on a memory task. This study provides preliminary evidence that selective sustained attention, which the authors report is an aspect of executive functioning, can be important for early numeracy learning.

In a new study in the Journal of Sleep Research, researchers investigated the relationship between early signs of attention deficit hyperactivity disorder (ADHD) in toddlers and disturbed sleep and activity levels. Researchers report that early signs of ADHD are associated with an irregular sleep pattern and lower daytime activity.

Research has shown that young children in resource-poor settings are not adequately immunized, overall. In a new study published in Pediatrics, researchers examined the impact of the delivery of automated mobile phone reminders both with and without compliance-linked incentives on immunization coverage in a rural community in India.

In a new study in Intelligent Buildings International journal, award-winning Green Preschools in Bali, Berkeley, and Hong Kong are used as the subjects of case studies to explore the quality of the preschool environment from the perspectives of architects and early childhood educators. The study took place over a 10-month period. The stakeholders consisting of architects, principals, and teachers were interviewed. Preschool quality was also measured across settings using quality rating scales.

Preschool classroom quality was found to be relatively consistent across settings. Researchers also found that architects’ knowledge of preschool design, understanding of children’s behaviors, a close-knit collaboration with the educators, and comprehensive design guidelines from the local government were significant in influencing the design of preschools regardless of cultural differences. Researchers provide recommendations for architectural practice and suggest that the study is a significant contribution to the professional literature on preschool design.

Previous studies have demonstrated support of the positive benefits of yoga for school-aged children with ADHD. In a new study in the Journal of Developmental & Behavioral Pediatrics, researchers examined the impact of yoga on preschoolers with ADHD symptoms.

The impact of a 6-week yoga intervention on both parent- and teacher-rated attention/challenging behaviors was examined. Children’s attentional control and heartrate was also measured. Researchers found that yoga led to improvements on an objective measure of attention and selective improvements on parent ratings.

The Education Department at the University of Michigan-Flint is seeking an Assistant Professor in Education. Responsibilities will include: teaching online, evenings, and potentially off-site; collaborative program oversight; advising undergraduate and graduate students; development of clinical partnerships for field placements; supervising students in the field; research and publishing; potential oversight/serving on doctoral committees in education leadership; and service to the university, community, and field. Review of applications will begin immediately and continue until the position is filled.

The ICIS conference provides three-and-a-half days of science reflecting 40 years of infant studies, networking and time spent in historic Philadelphia. As part of its 40th Anniversary Celebration, ICIS is sharing a series of videos to provide perspectives on the history and progress of infant studies.