When New Jersey’s new governor laid out his first state budget this week, he put preschool in the spotlight with plans to boost funding this year–and a pledge to expand pre-K statewide within four years.

Gov. Phil Murphy called for adding $57 million to the $688 million state-funded pre-K program, including $32.5 million for existing programs and $25 million more to build on current expansion efforts to reach another 100 school districts.

The Education Commission of the States recently reported that, so far, Alabama Gov. Kay Ivey proposed increasing funding for First-Class Pre-K by $23 million, along with increasing funding for the state’s pre-K through Third Grade initiative. New Mexico Gov. Susana Martinez requested $8 million more to enable another 2,000 children to enroll in state pre-K statewide; and New York Gov. Andrew Cuomo called for expansion of state pre-k programs for both 3- and 4-year-olds.

As Georgia celebrates the 25th anniversary of its Bright from the Start preschool program, Gov. Nathan Deal also highlighted the role of early education, saying “If we fail to get them reading on grade level by the end of third grade, they are much more likely to fall behind, both in the classroom and the life that awaits them beyond.”

Next month, NIEER will release The State of Preschool 2017 looking at state-funded pre-K quality, enrollment and funding during the 2016-17 academic year. While some states are moving ahead, too many states are continuing to leave children behind. (infographic below reflects 2015-16) 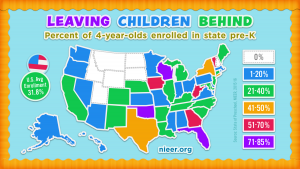 NIEER co-hosted the Abbott at 20: Building on Success conference drawing more than 240 advocates, educators and policymakers to celebrate New Jersey’s groundbreaking public preschool program and explore expanding access for more children across New Jersey – and the US.

NIEER Senior Co-Directors Steven Barnett and Ellen Frede joined panels discussing the history and implementation of the NJ Supreme Court decision mandating preschool as a remedy for children entering kindergarten unprepared, and how to replicate the Abbott program’s success.

This video produced by co-sponsor Advocates for Children of New Jersey captures what the Abbott programs have meant for teachers, parents and children.

In a new study released by Child Trends, researchers examined which combinations of subsidy policies were associated with better access to Early Care and Education for low-income families from both the perspectives of families and center-based providers. Low-income families were less likely than higher-income families to use center-based care as their child’s primary care type, especially for their preschoolers. They were also less likely to feel that they had a choice when it came to child care decisions and considered fewer options during their searches for care.

Researchers suggest that low-income families could benefit from subsidies if they are allowed to consider multiple options to find care that meets their needs.  Researchers also found that centers serving subsidized children do not offer the same quality offered by public programs such as state Pre-K, Head Start, or even other community-based programs. Researchers demonstrated how profiles of subsidy policies were associated with family access to care and the availability of high-quality care.

Authors conclude that a key challenge to state subsidy programs is balancing the overall number of families served with the quality of care that can be used with a subsidy. Recommendations for policy are offered.

A recent article in the International Journal of Environmental Research and Public Health examined associations between the risk of being overweight/obese for 4- to 6-year-old children and levels of green space exposure. They also and assessed the relationship between maternal education–a proxy for socioeconomic status–on these associations, based on data from 1,489 mother-child pairs living in Lithuania in 2012–2013.

Children had higher odds of being overweight/obese if they came from families with poorer maternal education, pathological mother-child relations, or had mothers who smoked. Living in areas with less greenness exposure was significantly related to being overweight/obese. Further, higher greenness exposure in residential settings appeared to be beneficial to children’s physical development. Study authors recommend green spaces exposure for psychosocial stress management and as a possible way to prevent overweight/obesity among children.

It has been estimated that approximately 30% of young children experience difficulties transitioning from wakefulness to sleep, which includes bedtime resistance and delay in sleep onset. In a new study published in Physiological Reports, researchers examined the relationship between evening light exposure and Melatonin suppression in preschool‐aged children. Previous studies have found that Melatonin is critical to the regulation and promotion of sleep across the lifespan. Researchers suggest that this is the first study to quantify the Melatonin suppression response to evening light exposure in healthy 3‐ to 5‐year‐old children.

Research findings demonstrate a light‐induced Melatonin suppression response in preschool‐age children. Study authors discuss the implications for understanding the role of evening light exposure to children’s evening sleep problems. Researchers recommend more research on sleep hygiene practices in early childhood as well as studies with larger samples and longitudinal data to examine the relationship between children’s age and their responses to bright light.

CURRENT GUIDANCE FOR FLUORIDE INTAKE: IS IT APPROPRIATE?

Preschool children are at a higher risk of Fluorosis due to excessive fluoride intake. A recently released paper in Advances in Dental Research provides a critical examination of the appropriateness of the current guidance for fluoride intake in the population. The study author suggests there is a need for further understanding of the relationship between exposure to fluoride at an early age and the development of fluorosis.

Examining children in communities where fluoridation efforts are and are not being implemented is recommended. Professional agreement on acceptable levels of mild and moderate/severe fluorosis is suggested, as well as a better understanding of mild fluorosis among the public. Further research recommendations include conducting prospective epidemiological studies that include larger samples of young children.

In a recent article in the Journal of the American Academy of Child and Adolescent Psychiatry, researchers tested the predictive validity of indicators of impairment and irritability on later psychological disorders. Preschool children were over-sampled for irritability and followed over three time-points into early school age.

The Society for Research in Child Development is pleased to announce the availability of small grants to support pilot or small-scale research projects by early career scholars.

Grants of up to $7,500 are available on a competitive basis for research projects conducted by SRCD Early Career Members who have completed their degrees in the past five years, regardless of their appointment, institution or country of residence.

Proposals must be submitted by 5:00pm EST on Friday, March 30, 2018.  Application materials should be emailed to scholar@srcd.org.

The AERA Annual Meeting is the largest gathering of scholars in the field of education research, with an expected attendance of more than 17,000 and more than 2,800 sessions.  Watch for presentations by several NIEER faculty and research associates.

The 2018 program theme–“The Dreams, Possibilities, and Necessity of Public Education”– encourages participants to consider the role of public education and role of research in promoting equity. The full online program is available here.