I recall sitting at my desk in 2002 as the Early Childhood Programs Coordinator at the Vermont Department of Education, when I first received a survey from a relatively new organization called the National Institute for Early Education Research (NIEER). The survey included multiple questions asking about Vermont’s Early Education Initiative (EEI), a state-funded pre-K program for at-risk children. As much as survey requests would make me groan, I dutifully completed and returned the survey without a second thought. “Perhaps this one might actually amount to something,” was always in the back of my mind. 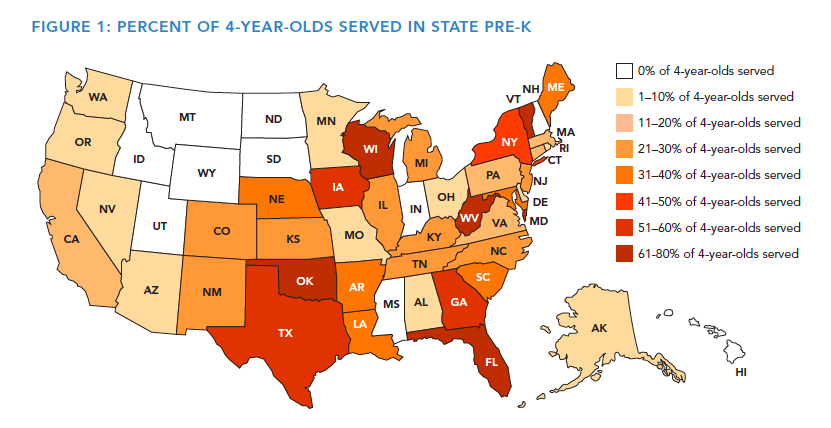 Little did I realize that I would be sitting on the other end of this survey a decade later. Now a member of the research team responsible for the NIEER State of Preschool 2014 Yearbook, I have a new appreciation for the combined contributions of my colleagues at NIEER and especially the state education agency partners who provide the data. I’ll spare you the details involved in collecting, verifying, analyzing, and reporting the data; suffice it to say it’s a laborious process for all parties concerned. But the result is worth the effort–and the sighs of relief echo across the NIEER office once the annual report is released.

That’s not what I want to tell you, though.

Hindsight is a wonderful gift. When I look back to see how early education has evolved both in my former home state and across the nation since filling out the first survey, I am amazed. State-funded pre-K has expanded its reach from 580,000 4-year-olds in NIEER’s first report, to more than 1.3 million in 2013-2014. Not a single state met all 10 of NIEER’s quality standard benchmarks in 2002, now five states and one of Louisiana’s programs clear the bar, and others are close behind. Little Vermont grew beyond most people’s expectations, from a small program serving 1,001 at-risk children in 2002, to a program serving more than 7,200 children, regardless of their situation. Vermont now ranks first among the states for enrollment (behind only DC) serving more than 90 percent at age 4 and 25 percent of 3s. Vermont has placed quality improvement in its sights as well, with support from the federal Preschool Development Grant program. The Green Mountain State is not alone in showing other states what is possible, and momentum continues from New York City to Mississippi, North Dakota, and Hawaii. There will be even more information available in future NIEER Yearbooks.

What does momentum on the national front have to do with the NIEER Yearbook and other research reports? I am convinced pre-K would be a footnote rather than a headline without this research tracking our progress. Filling out those checkboxes has paid enormous dividends. Once relegated to discussions in state agency meeting rooms, pre-K is now on the lips of parents, politicians, scientists, economists, philanthropists, and leaders in military, law enforcement, and business, throughout the nation. The Yearbook has proven to be an indispensable resource for policymakers seeking to capture best practices and policies around the country. The biggest beneficiaries of the Yearbook and all the hard work involved, however, are the many children who can look forward to going to pre-K as a result of these national conversations. They just don’t know how to express it quite yet.