Yesterday, the White House hosted its first Summit on Early Childhood Education. The Summit brought together a wide variety of stakeholders, including local government officials; private philanthropy; researchers; federal government officials; and business leaders. The President’s remarks can be seen here. The event also launched the InvestInUs campaign, administered by the First Five Years Fund to encourage private-public investment in a range of early childhood activities. The campaign released a profile of major private commitments, as well as highlighting notable “early learning communities” that may serve as models for other communities. The White House Council of Economic Advisers released a new report, The Economics of Early Childhood Investments, which examined the benefits of a wide range of early childhood education programs, from home visiting to kindergarten. A recap of the ongoing Twitter conversation can be seen here.

The Departments of Education and Health and Human Services also made major announcements aligned with the Summit. Eighteen states were announced as winners of competitive federal Preschool Development and Expansion Grants. Grant winners are displayed in Figure 1, with amounts in Figure 2. 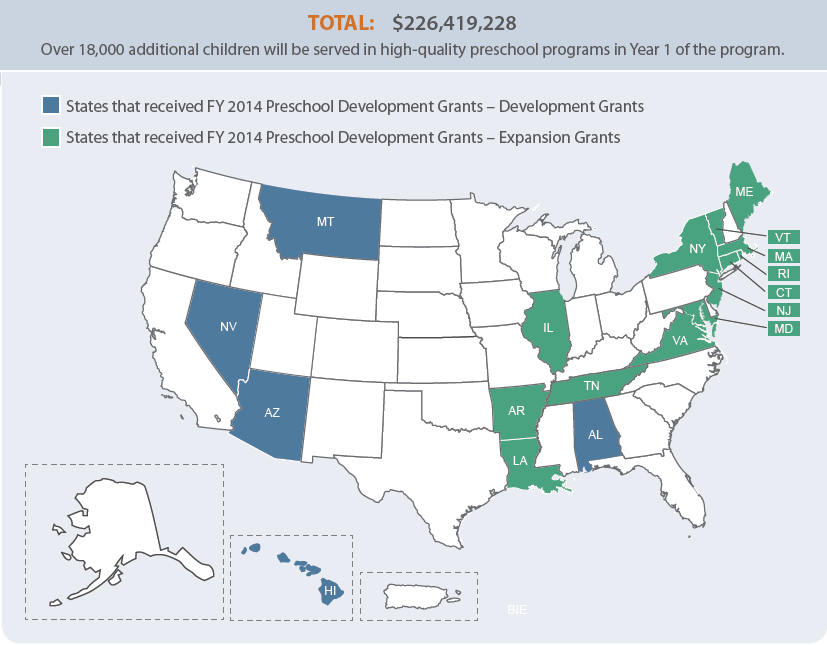 Development grants are for states with no or small state-funded pre-K programs, while expansion grants are for those states with established programs to improve quality and increase access. More information on the current preschool offerings of these states is available here. The Departments estimate that this $226 million investment will expand services to more than 33,000 additional children in the first year alone and ensure that children are experiencing preschool of high quality. The Department has released score sheets and applications for winners and for those who did not receive funding.

The Department of Health and Human Services also announced preliminary grantees for their Early Head Start-Child Care partnerships. The program, which works with existing child care settings to expand access for infants and toddlers to high-quality care, will provide $435 million in funding to 234 grantees. The Department noted that it is still in negotiation with the agencies they’ve announced, and that the award amounts may be subject to change. The full allocation of $500 million will be awarded by the end of March 2015.

All told, this week’s announcements are adding new federal funds for early childhood education to 49 states, the District of Columbia, Puerto Rico, and the Mariana Islands, and will serve an estimated 63,000 additional children. While state education departments and others who have worked hard on these applications are surely enjoying well-deserved celebrations, the greatest challenge may be on the horizon: implementing the plans and working toward the goal of expanding quality early education.