Two of New York’s most distinguished leaders who shared a family name (Roosevelt) were strong advocates for the 99 percent, long before that term was common with their campaigns for the “Square Deal” and the “New Deal.” Today’s leaders are poised to echo their efforts with what might be called the “Real Deal.” A key element of the real deal is to give every child access to a world class 21st Century education, beginning with high quality pre-K for all.  New York State has been promising universal preschool to its children for 20 years. With leadership from the NYC Mayor, the Governor, and Legislators in the Senate and Assembly they are finally moving to fulfill that promise–a victory for New York’s young learners and the middle class. Last week, the State Senate proposed supporting free full-day prekindergarten and after-school programs in New York City with $540 million per year in state funds over 5 years.  The Assembly has already endorsed Mayor de Blasio’s plan for expansion with a pre-K and after-school tax on NYC’s wealthiest.

The next step is for leaders to come together behind a single plan to move forward, with a firm commitment to financing and a timeline for delivering on this promise. Recent statements indicate that New York’s leaders are prepared to put partisanship and personal ambition aside to do right by the state’s children.  The Assembly and Mayor have indicated they can accept the Senate plan. The Governor has repeatedly said he supports fully funding pre-K and should join them and make this plan a reality. If he does so, he will have propelled the preschool-for-all movement to a major turning point, not just in New York, but in the nation.  New York is the third most populous state.  If it were an independent country it would have the world’s 16th largest economy. With high-quality public education beginning at age four for all, New York will become a model for other states and even countries beyond our borders.

As we reported in our 2012 State of Preschool Yearbook, New York State has some way to go to achieve this goal of national and international leadership in early education.  It currently serves about 44 percent of its 4-year-olds, ranking ninth in the nation for enrollment, but funding per child has not kept pace with program expansion, jeopardizing quality. 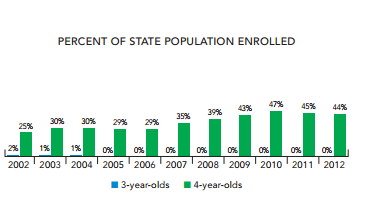 Providing adequate funding and a timeline for implementation is a major step toward the real deal in pre-K, but political leaders must also support the hard work needed to successfully implement this plan and deliver the promise.  This will require a relentless focus on quality, and a shift from campaigning to governing that will provide pre-K programs with the support and accountability required to achieve and maintain excellence in every pre-K classroom.  At this stage it is important to ensure that state and local agencies have the resources to guide this continuous improvement process, as in other states where pre-K has produced the promised results (Michigan, North Carolina, and New Jersey, to name a few).

When well implemented, pre-K is a valuable and important long-term investment.  At NIEER we estimate that by offering all children quality pre-K, New York will actually realize a net reduction of more than $1 billion in its education budget by 2030. This figure includes cost-savings as a result of reducing special education placement and grade retention.  It does not include other long-term benefits from improving the education of New York’s children–increased productivity and economic growth and better health outcomes, among them.

New York isn’t alone in the pre-K push. Even states that have not historically supported pre-K are getting in on the investment, including: a small program in Hawaii; a pilot program in Indiana; and a new program legislated in Mississippi.  Yet, New York’s UPK initiative, if done well, could become the nation’s leading example of good early education policy because of its proposed quality and scale.  It’s time for every New Yorker to get behind this initiative and work with the Governor, Mayor, and legislative leaders of both parties, to carry through on New York’s 20-year-old promise.