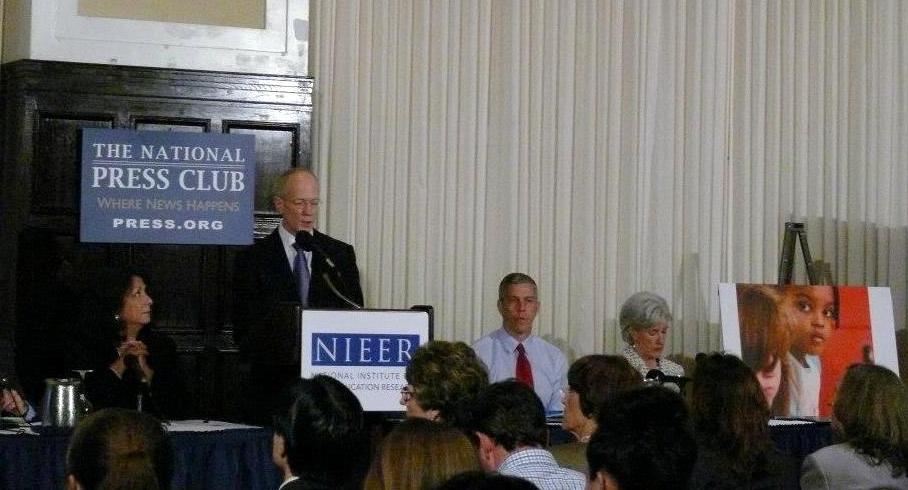 Today NIEER released its most recent edition of The State of Preschool 2012: State Preschool Yearbook at the National Press Club in Washington, D.C. This Yearbook marks a decade of data collection, from the 2001-2002 to 2011-2012 school years, tracking the changes in state-funded pre-K policies during some difficult financial times. Joining NIEER at the release were U.S. Secretary of Education Arne Duncan; U.S. Secretary of Health and Human Services Kathleen Sebelius; President of the American Federation of Teachers Randi Weingarten; Chairman Emeritus of the Vanguard Group Jack Brennan; and Celia Ayala, CEO of Los Angeles Universal Preschool.

This year’s findings were the most sobering since NIEER started collecting data. Total state-funding fell by nearly half a billion dollars from the previous year, an unprecedented drop. This translated to a $442 decrease in per-child funding, down to $3,841. Enrollment growth basically stagnated – while 10,000 more kids were enrolled in the 2011-2012 school year, population also grew. This translates to only 28 percent of 4-year-olds and 4 percent of 3-year-olds, the same as in the previous year.

As NIEER’s Director Steve Barnett noted in his remarks, “the 2012 cutbacks in quality standards were directly related to shortfalls in state funding.” Quality supports were particularly hard hit by the dramatic cuts. While three programs met a new quality standards benchmark – California for early learning standards, Ohio for site visits, and Pennsylvania’s Pre-K Counts for lead teacher degree – seven programs lost a total of nine benchmarks. We were particularly concerned that five of these losses were related to site visits for monitoring program quality – evidence indicates that only high-quality pre-K programs significantly benefit children’s learning and development, and visiting sites to gauge quality helps ensure programs are serving children’s needs. Quality is of the utmost importance in early education programs, as noted by LAUP CEO Celia Ayala whose experience as a former practitioner informs her work in the field.

The panel conversation at the National Press Club covered not only this new data on state pre-K in recent years but also what the field looks like going forward, including the implications of President Obama’s plan for Preschool for All in his Fiscal Year 2014 budget proposal. The diversity of today’s panel members makes clear that the importance of high-quality pre-K and its lasting benefits are well-understood in our nation’s capital, in the classroom, and in the boardroom. Secretary of Health and Human Services Kathleen Sebelius noted that as a former governor, she would have welcomed federal investment in early education, while Secretary of Education Arne Duncan stressed the importance of collaboration among agencies and levels of government to best serve kids.  He called for a “preschool movement” in America to support the president’s plan

Ensuring children have access to high-quality pre-K isn’t just an issue for the short-term. A significant body of research finds that the benefits of pre-K far outweigh the cost. Good preschool education provides children with a stronger foundation for lifelong success–reducing school failure, raising test scores, and increasing educational attainment. Jack Brennan of the Vanguard Group presented the business case for early childhood education, noting that businesses are the future beneficiaries of the skills that children gain in pre-K. State budgets are only now recovering from the Great Recession and, as Randi Weingarten of AFT noted, now is the time to make sure high-quality pre-K is a top priority of legislators.

Video of the full release event is available on C-SPAN’s web site and the conversation is ongoing on Twitter. NIEER will also be continuing to spread the word of this report at a Capitol Hill Briefing tomorrow, co-sponsored with First Focus.