Hispanic children and families have been hit particularly hard due to recent funding cuts in state-funded pre-K. While the State Preschool Yearbook does not break down data by ethnicity, our data on state efforts combined with other sources paints a troubling picture for Hispanic preschoolers, especially those growing up in a household where English is not the primary language. A survey of Hispanic families shows that Hispanic parents are very likely to enroll their children when voluntary preschool education is available to them, but only 25 percent of Hispanic children at age 3 attend public or private preschool, compared to 43 percent of non-Hispanic children. State pre-K—which serves primarily 4-year-olds—has been important in increasing Hispanic enrollment at age 4, but Hispanic children still lag in access with 64 percent in a public or private program compared to 70 percent for non-Hispanic children.

Twenty-one percent of 3- and 4-year-olds nationwide live in an immigrant family with at least one foreign-born parent. According to the Pew Hispanic Center, 6.1 million Hispanic children were living in poverty in 2010, representing 37.3 percent of all poor children. As can be seen in the graph below, the number of Hispanic children living in poverty accelerated sharply during the recession, due in large part to the 11.1 percent unemployment rank seen among Hispanic workers in 2011. The combined impact of being from a low-income family and having limited English proficiency can put these students at a serious risk of school failure, especially if they lack access to a quality preschool program. 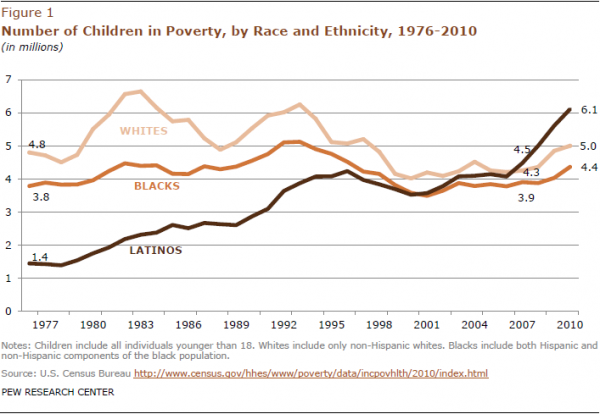 Original graphic from the Pew Hispanic Center can be viewed here.

More than half of the nation’s Hispanic population resides in just three states: California, Florida, and Texas.  Unfortunately, preschool programs in these states may not give Hispanic students the boost they need. Florida and Texas have high enrollment levels but low quality standards, which means that thousands of children are enrolled in programs that may not meet their needs. They both have per-child spending levels under the national average of $4,151, which further threatens quality. California’s program has grown rapidly due to including the state’s child care programs under the same umbrella, but per-child spending levels and policy standards are low there, as well.  While many programs may exceed minimum standards, particularly when public schools are the providers, two aspects of these programs are particularly worrisome—class sizes and funding. Texas limits neither class size nor ratio and Florida has been increasing class size. California does somewhat better since it limits teacher-child ratio to a reasonable level even though it does not limit class size. All three states decreased funding per child in recent years, and in Florida it barely exceeds $2,400 per child, a figure too low to sustain quality under any reasonable definition.

Additionally, there are five other states with Hispanic populations above one million: Arizona, Colorado, Illinois, New Jersey, and New York, as can be seen from this interactive map from the Pew Hispanic Center. Arizona totally eliminated its state pre-K program in recent years, though First Things First stepped up to provide some services to preschoolers there. Illinois and New Jersey are bright spots ranking among the top 15 in the country for program quality standards and both ranking in the top 3 for enrollment of 3-year-olds.  However, both New York and Colorado reduced per child funding when the recession squeezed state finances.

The video below shows the change in enrollment in these states with large Hispanic populations over the last decade. While enrollments have increased tremendously, due in large part to the Florida program’s creation in the 2005-2006 year, we know that funding has not kept pace with the needs of so many more students. You can look at other trends in spending, quality, and access for these eight states in this interactive data set.

[youtube http://www.youtube.com/watch?v=bXH-JVGBrB8?hl=en&fs=1]As was noted last year by Celia Ayala, Chief Executive Officer, Los Angeles Universal Preschool, “[w]hile ELLs can come from any linguistic background and therefore include children of any race and ethnicity, Hispanic children merit particular attention as their population grows, but many continue to suffer from an achievement gap.”  At least 140,000 ELL students are served in state-funded pre-K programs; this number is likely to be significantly higher as many states with large Hispanic populations could not report ELLs specifically. Less than half of state pre-K programs report limited English proficiency as a factor that may make students eligible for pre-K. The majority of pre-K initiatives require at least one support service for ELLs and their families, with support services ranging from administering a home language survey to providing translators to offering monolingual non-English classes in pre-K.

Recent research on the benefits of bilingualism can bring renewed attention to this important issue. Research has pinpointed significant benefits to bilingualism including increased language and print awareness, classification and reasoning skills, concept formation, visual-spatial skills, and creativity. Bilingual children maintain strong connections to parents, grandparents and extended family leading to improved academic outcomes. Students also benefit from being secure with their home language. There has also been important research in the last few years indicating that attending a high-quality preschool program improves outcomes for Hispanic children, and that dual language practices can enhance outcomes in both English- and Spanish-speaking children. Pre-K attendance can improve early literacy and mathematic skills, and at least this one study found that gains were improved by being in a classroom with a Spanish-speaking teacher.

As the Hispanic student population grows and extends into rural and suburban areas, schools must provide additional supports for those students growing up in a dual-language household. A recent report from the New America Foundation focuses on bilingual education efforts in state-funded pre-K in Illinois and offers sound advice for all pre-K programs as they work to ensure ELLs receive high-quality services:

• ensure that pre-K providers receive financial support from their local districts for resources they spend on English language learners, and that there is an adequate bilingual/ESL budget to cover eligible children;

• track student outcomes for ELL students over time to determine where investment is most (and least) effective; and

• continue to align the ELL experience in pre-K, kindergarten, and the early grades and enable shared professional development opportunities in ELL instruction for teachers and school leaders across the pre-K to third grade span.

Additional recommendations on supporting dual language instruction at both the policy and classroom level can be found in the NIEER presentation “Enhancing Policy and Practice for Young Dual Language Learners: What Is the Research Base?”

There is significant support within the Hispanic community to increase access to quality preschool programs.  The National Council of La Raza advocates for supportive programs for both students and families, and international music star and early education advocate Shakira, a member of the President’s Advisory Commission on Educational Excellence for Hispanics, recently spoke at the Summit of the Americas on the need for quality early learning.