Starting the week on an exciting note for elected officials, advocates, and policy wonks, President Obama released his proposed budget for fiscal year 2013 on Monday morning. Education was a clear priority throughout the press conference at Northern Virginia Community College in Annandale, Virginia, particularly on preparing students for 21st century jobs by focusing on career and technical skills. As readers of this blog can attest, early education is an important building block in preparing students for a life of learning and earning.

Details of the budget are still being fleshed out, but there seems to be good news for early education in the White House’s proposal, as outlined below.

In addition, the National Women’s Law Center has information on additional federal programs in the FY13 proposal that support families with young children, including the Child and Dependent Care Tax Credit. Of course, not all child care funding goes to children under 5 (though most does) and early education will only be a modest fraction of such high-profile initiatives such as i3, Promise Neighborhoods, and RTT.

Laura Bornfreund, Maggie Severns, and Clare McCann at Early Ed Watch compiled the helpful table below to track changes since FY2011 in some key programs used for early education. 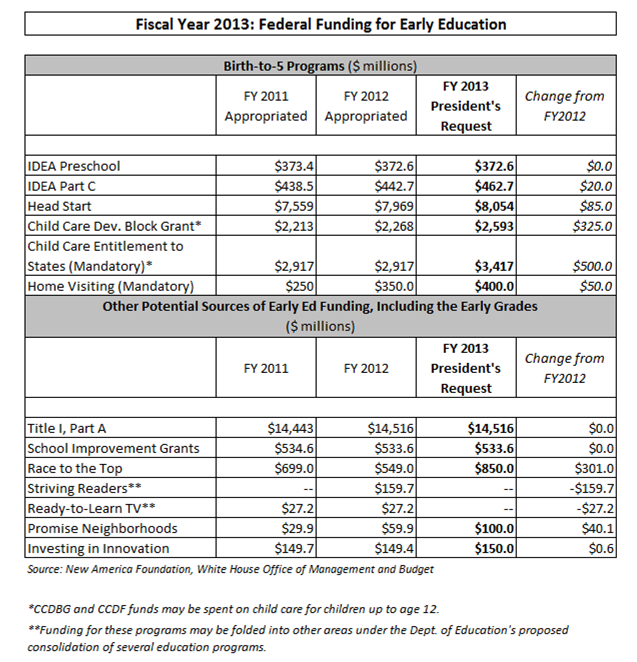 As noted by the New America Foundation’s Key Questions on the Obama Administration’s 2013 Education Budget Request, there are still a number of questions surrounding the place of early education in this budget, including whether the portion of RTT funds earmarked for early learning would be distributed at the state level or district level. They also note that the budget proposal encourages districts to redesign school schedules to better serve students through the 21st Century Community Learning program, though it is unclear so far whether states will be encouraged to apply this to the early grades, such as extending half-day kindergarten into full-day services.

It’s worth noting that a presidential budget proposal is, according to Birth to Thrive, just “the first move in a high-stakes game that will be complicated this year by presidential and congressional politics.” Considering the sharp partisan divisions seen in recent legislative battles, the pressure of the Budget Control Act to cut spending by $900 billion over 10 years, and the high-profile politics of an election year, it is hard to say exactly how much of this proposal will ever see funding. The great strength of the budget proposal, though, is to allow the president to lay out his priorities in greater detail than any speech or campaign ad could. Early education is clearly an administration priority, though perhaps not as high a priority as we would like.  All of us concerned about the future of America’s youngest learners must ensure that elected officials remember that high-quality early education programs are a good economic investment both short-term and in the future.