One of the most neglected questions in the ECE policy arena is “How should we respond to the failure to find lasting effects for Head Start and Early Head Start after investing years and many millions in nationwide randomized trials of those important programs?” I say neglected because there is far less awareness of what the research says than one might expect given the importance of the high-quality research effort that represents our best shot at unbiased estimates of program impacts. For instance, I find that few people even know that Early Head Start’s long-term effects have been evaluated through fifth grade.  I addressed this long-simmering question  in an article published today in the journal Science.  At the outset, I wish to make clear that the evidence does not lead me to the conclusion that we should end these programs, but that they need major reform.  Let’s start by quickly reviewing the evidence.

One randomized trial evaluated the impacts of a year of Head Start by following 4,667 children and their families from entry in Head Start through kindergarten and first grade. After one year of Head Start cognitive effects were positive, but fairly small, and the broader the domain the smaller the effects. In follow-up the effects were even smaller.  No cognitive or school progress effects were found in kindergarten or first grade, though one might argue that there is a persistent effect on IQ of about 1/10th of a standard deviation.  This would close about 10 percent of the gap between Head Start children and the average child on IQ.  No effects were found on any teacher-reported measure of social-emotional development or behavior.

Upward adjustments can be made to the findings because not every child followed the random assignment (some assigned to Head Start did not attend, some assigned to the control group found their way into Head Start).  Yet even after such adjustments, follow-up results remain weak.  Additional adjustments could be made for participation in other programs, but these would make little difference, particularly at age 3 when high-quality alternatives are scarce.

A randomized trial of Early Head Start with more than 3,000 infants and toddlers produced results similar to those for Head Start even though most children and families participated two or more years. Effects at ages 2 and 3 were quite small for cognition and social-emotional measures including aggression. By age 5 no effects were found for cognition and only one small socio-emotional effect was found. In the grade 5 follow-up no effects were found on any of 49 measures and the estimated effects were near zero for both cognitive and social-emotional development.

For some in the early childhood field the reaction to these long-term findings has been denial. One claim is that bad public schools offset Head Start’s positive effects.  The national Head Start study finds, to the contrary, that gains in literacy and math accelerate for both Head Start and control groups after they enter kindergarten.  Any wash-out in Head Start effects from the public schools occurs because control children quickly make up the small advantage from attending Head Start.  Others claim that non-experimental studies consistently find long-term effects despite a lack of short-term gains in achievement.  However, the non-experimental studies are not really consistent among one another in either their short- or long-term patterns of effects.  Their positive long-term results likely result from chance variation and methodological failings rather than real effects.  If effects are not evident at fifth grade, they won’t be later.

Once we accept these disappointing findings, why not just end the programs as Joe Klein recently argued in Time magazine?  I offer two reasons.  First, America cannot afford to let so many children fail academically and socially because they are poorly prepared.  Second, some other preschool programs have succeeded to a much greater extent, and Head Start can be reshaped to be similarly effective.

Table 1 compares the initial impacts of Head Start and some other large-scale programs.  Pre-K programs with above average standards and funding are found to produce larger effects than Head Start in rigorous studies including a recent randomized trial.  The Chicago Child Parent Centers, which are similar in key respects to the state pre-K programs in Table 1, have been found to produce effects on achievement and social development into adulthood as well.  Reshaping Head Start to more closely resemble these programs would enhance its effectiveness. A quantitative summary of research on early educational intervention over the past 50 years adds weight to this argument as the Head Start and Early Head Start comprehensive services approach is associated with weaker effects, possibly because it reduces the educational focus. 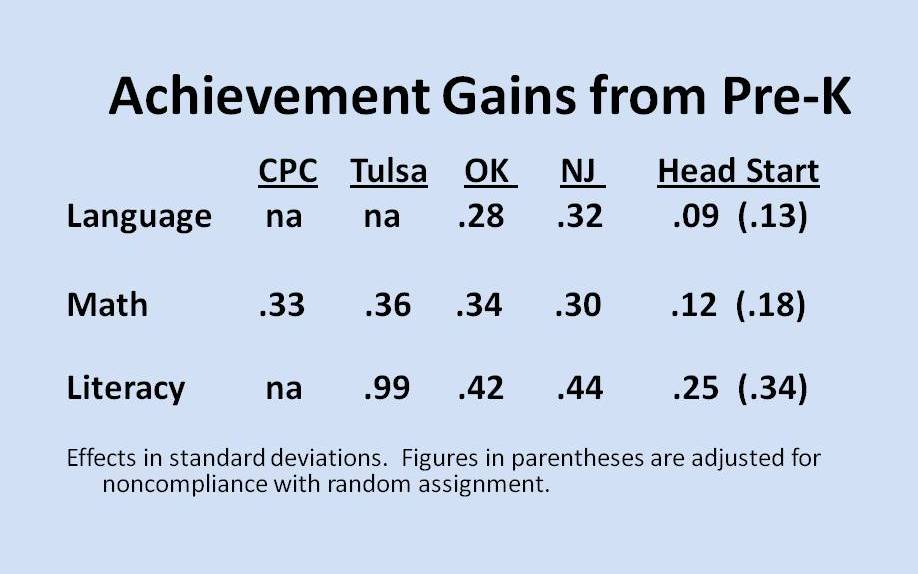 My prescription for improving Head Start includes increasing the percentage of funds spent inside the classroom, building a stronger connection to public education, and eliminating much federal oversight and related paper work.  Early Head Start needs the same freedom from regulation, but should adopt home-based models that have a strong evidence base (Olds’ Nurse Family Partnership) as well as strengthen center-based options. Give programs a set amount of money, audit the books, and assess teaching and learning.  Teaching should be highly intentional and include direct instruction one-on-one and in small groups.  A new continuous improvement process should be put in place for learning and teaching.  The Obama administration’s plans for re-competition of low-performing Head Start agencies should be implemented as soon as possible based on both measures of teaching and broad measures of child progress.  Early Head Start should be regarded as an experimental program and subject to large-scale research for at least the next five years.

No doubt, these recommendations will be as controversial as is my longstanding recommendation to increase the amount and quality of education required of Head Start teachers and to increase their compensation accordingly.  Head Start teachers should be given the opportunity to return to school with tuition and fees paid by government loans that would be forgiven if they remain in Head Start five years later.  The quality and content of the programs they attend should be subject to an approval process to be eligible for these forgivable loans.